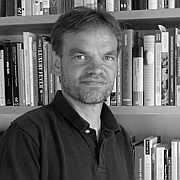 Born in Bremen in 1967, I started studying philosophy there in 1988. I was mainly interested in questions of bioethics, but due to the heated debate around Peter Singer’s “Practical Ethics” I developed an interest in the question how to justify moral principles in the first place. Thus I was led into metaethics and the philosophy of science.

From 1993 to 1995 I was involved in the LOGO FILM project. We conducted interviews with major figures in philosophy (Richard Hare, Willard Van Orman Quine, Hans Albert etc.) and assembled them to a film that should give a vivid picture of the methods and point of analytic philosophy. You may view the film online:

I came to Bayreuth in 1996 where I completed my Ph.D. thesis in 2000. The resulting book Gibt es moralisches Wissen? (Is there Moral Knowledge?) is concerned with the so-called “cognitivism debate” in metaethics. It argues that although there is no moral knowledge in a sense that may be compared to scientific knowledge, it may well be possible to distinguish between reasonable and non-reasonable moral principles. The heroes of this book are David Hume and Richard Hare.

Since 2000 I have been deeply involved in the development of the P&E programme. I have always been convinced that a well-run P&E programme could contribute much not only to the academic, but also to the real world. I am very much at home in the P&E engine room.

My main areas are:

If you would ask me to recommend some authors in philosophy, I would name David Hume, Ludwig Wittgenstein, Karl Popper, John Leslie Mackie, Simon Blackburn, Richard Hare and Gerhard Vollmer.

You find my current and past courses on the P&E intranet.